Design of the Church 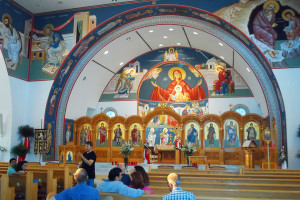 Eastern Orthodox Churches generally follow the same architectural formula- the form of a dome superimposed on a cross or a basilica. Architecturally, the interior of Saint George is heavily influenced by elements found in the Great Church of Christ, commonly called Agia Sofia, in Constantinople (present- day Istanbul), particularly in the sweeping arches and the dome. Unlike non- Orthodox churches which use steeples and spires, the Byzantine roof is typically constructed with one or more domes.

The dome is a symbol of the union of heaven and earth. The dome of St. George, influenced by the dome of Agia Sofia, is made of interlocking copper plates and is pierced by 24 windows and reminiscent of the dome of the Great Church floating on a sea of light. The dome has an internal diameter of 30 feet, external diameter of 34 feet and an internal height of 55 feet from the floor. Externally, it is crowned with a cross which symbolizes the holiness and strength of Christ’s Church. The top of the cross is 60 feet from the ground.

Saint George was designed by Sam Grillas and Mark Lawrence of Grillas, Pirc, Roser and Alves of Irvine, California. The floor space is approximately 10,000 square feet and has a designed seating capacity of 383 persons.

Interior of the Church

The floor of the Church is in the shape of a Greek Cross with four equal arms. There are three separate areas of the Church proper: the Narthex, the Nave and the Sanctuary.

The Narthex is the entry vestibule of an Orthodox Church. The Narthex contains a “sand urn” for holding candles and Icon Stands. When Orthodox Christians enter the Church they light Candles and venerate the icon. Candles constantly remind us that Christ is the Light of the World and that we are called to reflect that Light in our lives. The design of the windows in the Narthex area of the Church were inspired by the church of St. Anna in Heraklion, Crete built in 1555.

The Nave is the largest part of the Church. It is here that the people gather for the celebration of the sacraments and services. Between the Altar area and the main seating area of the Church is a raised area known as the Solea. With the exception of the  Divine Liturgy and the offices of Matins and Vespers, the services and sacraments of the Church mainly take place on the solea.

The Sanctuary, or Altar, is separated from Nave by an Icon Screen or lconostasion. The Iconostasion is symbolic of the Temple Veil in the Old Testament which separated the Holy of Holies from the remainder of the Temple. On the Iconostasion are icons which are painted according to the Orthodox Tradition. There is a definitive scheme of placement of the chief icons on the Iconostasion. The icons on the right side are those of the Lord Jesus Christ and St John the Baptist, the Archangel Gabriel and St Demetrios. Those on the left are, the Virgin Mary and St George, the Archangel Michael and Sts Constantine and Helen. Orthodox icons are not intended to be realistic paintings but stylized representations of Saints and events important to the life of Christ.

The Sanctuary, where the Altar Table is located, traditionally is the eastern most area of the Church. (In Orthodox Theology the Altar is always considered the East irrespective of the actual geographic orientation of the Church.) The Altar, or “Holy Table” also represents the Tomb of Christ. When a Church is consecrated, relics of martyrs are placed within the Altar Table since the Church has been built on the faith and blood of the martyrs. The early Church found itself worshiping in the catacombs and among the tombs of the martyrs. In a very real sense we continue that practice since every consecrated altar is a tomb of martyrs.  The Holy Table is draped with an ornate cloth and upon the Altar are found the: Tabernacle which contains Holy Communion for the sick; the Antimension, a  consecrated Icon Cloth on which the consecration of the Holy Gifts takes place; two white candlesticks; and the Holy Gospel.

Behind the Holy Table is a large, wooden cross bearing an icon of the Body of Christ. The table to the left of the apse is the Table of Preparation where the Chalice and Paten are kept and the bread and wine are prepared for the Divine Liturgy.

On the Right Side of the Solea is the Bishop’s Throne where the presiding hierarch sits when he is present. It is decorated with an icon of Jesus Christ as High Priest. Opposite the throne on the left side is the Pulpit which is used by the deacon for the proclamation of the Gospel during the Liturgy.